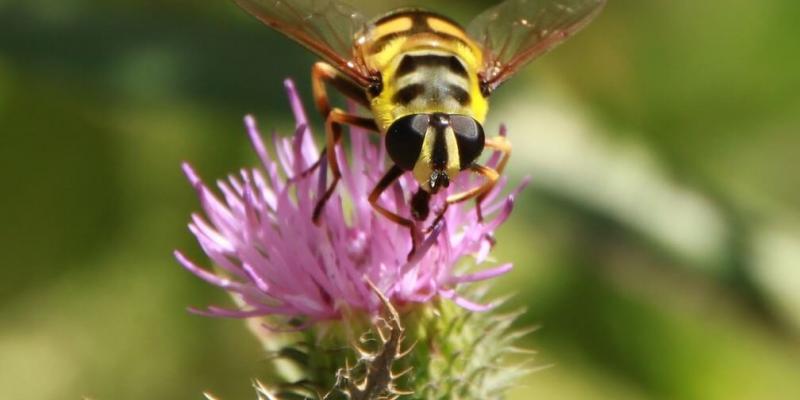 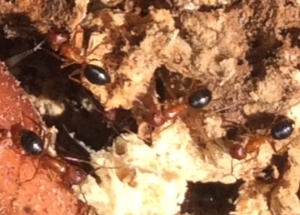 Carpenter Ants shown here are a common SWFL pest. Carpenter Ants like to nest in moist, decayed wood.  They will hollow out wood in trees, firewood, and fence posts, but they don’t eat wood.  Indoors, they build colonies in wall voids, foam insulation, eaves, and crawl spaces.  Peak foraging occurs at night. They primarily feed on insect honeydew, plant and fruit juices, and insects.  Carpenter Ants often invade structures in spring/fall looking for other food sources, including sweets. 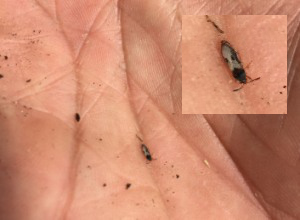 He is in “good hands”. Or is he? This little guy is a Chinch Bug. In turfgrass areas, injury typically appears as yellow or dead drought-stressed or heat-stressed spots in the yard, most commonly in July and August. Infestations are usually initially localized because chinch bugs feed in aggregates. Injured plants occur in spots or patches that enlarge as the population increases and spreads. When infested host plants die, high numbers of chinch bugs migrate by walking to neighboring lawns or turf areas in search of suitable host plants. 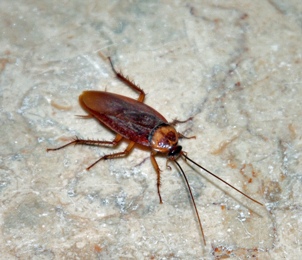 Are you sharing your silverware with an Palmetto Bug? Also know as the American Roach, this insect can travel quickly, often darting out of sight when someone enters a room, and can fit into small cracks and under doors despite its fairly large size. It is considered one of the fastest running insects. Roach race anyone? 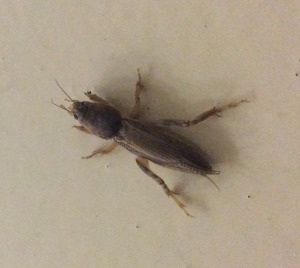 Mole Crickets range in color from a light to a dark brown. Even when your yard is infested with these pests, it is rare to actually see them because, most of the time, they remain underground. They only come out to fly and mate twice during a typical year, once in the spring and again in the fall. During these periods, you can sometimes locate their exit holes in the ground. They can become very numerous during the warmer, summer months and can end up causing a lot of damage to your lawn. 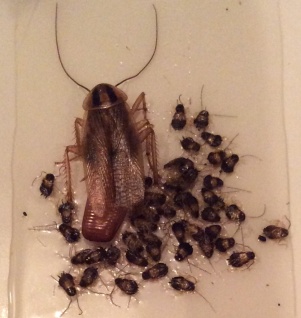 The most common cockroach found in residential and commercial kitchens is the German Roach. Here is a nasty image of mama cockroach and babies.  You can see the egg case or “ootheca” still attached to the female and the babies tried to crawl away but got stuck in the glue board. Tony’s will stop em dead in their tracks. 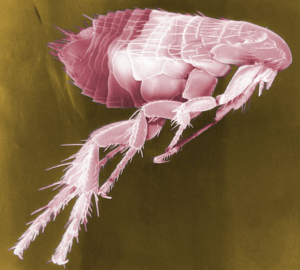 Fleas are excellent jumpers. They can propel their bodies more 200 times their length. This allows them to easily move from host to host and into the surrounding environment. Fleas are relatively small and are typically between 1/16 and 1/8 inch in length when full grown. They do not have wings. Flea bodies are specially designed to be able to withstand difficult conditions. They have a hard outer coating which means that they are not easily crushed. 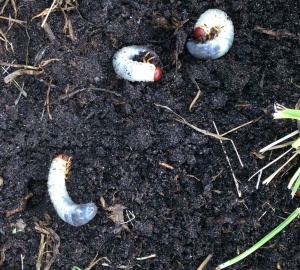 Grub Worms destroy lawns by eating away at the roots. An active infestation can cause a lawn to turn yellow and eventually brown as the roots are severed from beneath. In the garden, grubs can easily destroy crops. This happens most often in early spring when plants are actively growing new roots. The worms eat the roots causing the plant to die. These white grubs found in the surface soil are easily identified by their characteristic “C” shape and reddish-brown head. 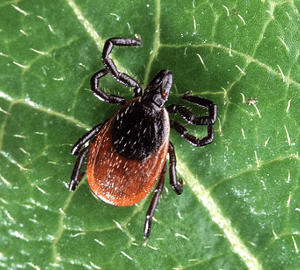 Ticks feed on the blood of humans, birds, reptiles, and wild and domestic mammals. Ticks are generally not born with disease agents. They acquire them during feeding and pass them along onto other animals during subsequent feedings. There about 850 tick species, some of which are capable of transmitting diseases such as Lyme disease. 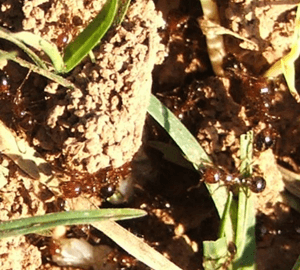 Fire Ants are more aggressive than most native species and so have pushed many species away from their local habitat. These ants are renowned for their ability to survive extreme conditions. For humans, the sting is rather painful, a sensation similar to what one feels when burned by fire, and so the name Fire Ants. 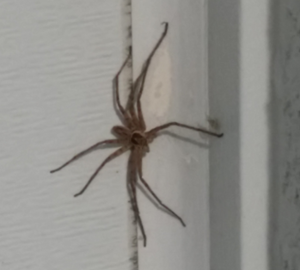 Wolf Spiders don’t build webs to catch prey. Instead they actually go out at night and hunt, like a “wolf”, however, the wolf spider does not operate in a pack and prefers to live alone. They tend to try to head indoors in the fall when temperatures begin to fall. They are sometimes found in garages or basements, and near doors, windows, and house plants. 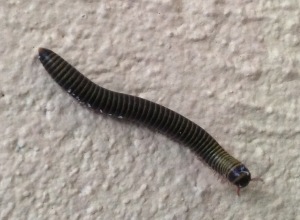 Millipedes are beneficial, not a pest, and actually not even classified as an insect. They eat dead organic material such as thatch ( dead grass clippings) which is good for your lawn, as they provide beneficial fertilizer. Cousin centipede actually feeds on insects harmful to your landscape plants, so there is no cause for concern. 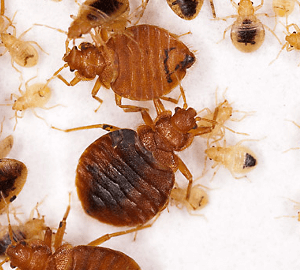 Don’t let the Bed Bugs bite. We have all heard that saying. But most of us have never seen a bed bug. Bed Bugs are small, flat, parasitic insects that feed solely on the blood of people and animals while they sleep. Bed bugs are reddish-brown in color and wingless. They hide during the day in places such as seams of mattresses, box springs, bed frames, headboards, dresser tables, inside cracks or crevices, behind wallpaper, or any other clutter or objects around a bed. Bed bugs have been shown to be able to travel over 100 feet in a night but tend to live within 8 feet of where people sleep. 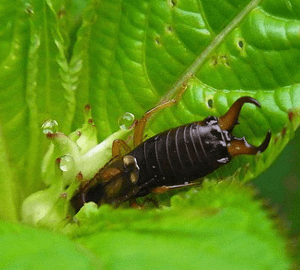 Earwigs mostly come out at night and often hide in small, moist crevices during the day. At night they feed on a wide variety of insects and plants. Earwigs damage foliage, flowers, and various crops. 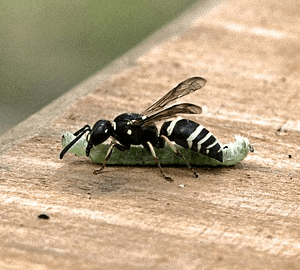 Wasp stings contain a pheromone that other wasps can detect and signals them to become more aggressive. Their stings can be quite painful. However, not all wasps sting. There are over 30,000 species identified and come in every color imaginable. 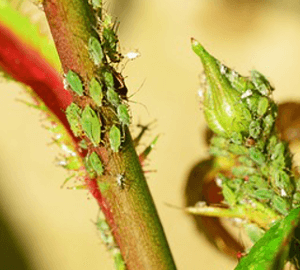 Aphids are some of  the most destructive insect pests on cultivated plants. The serious damage they do to plants has made them enemies of farmers and gardeners around the world. 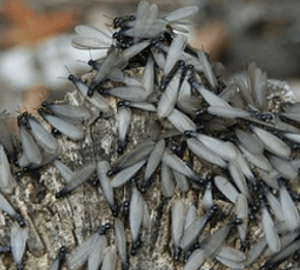 Termites are known as “silent destroyers” because of their ability to chew through wood, flooring and even wallpaper undetected. Each year, termites cause more than $5 billion in property damage. Swarmers are typically the first sign of termite season as these winged-pests show up inside homes in early spring. Each colony can contain as many as a million termites. Check out our termite control in Florida to learn more. 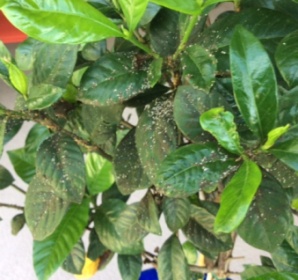 Most Scales are parasites of plants. Scale insects vary dramatically in appearance and feed on a wide variety of plants, though particular species feed on particular plants or plant groups. They eat the sap of the plant and excrete a substance referred to as honeydew which promotes growth of a black sooty mold. 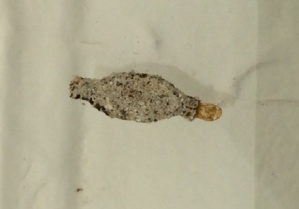 If you’re at home, thinking “what is this freaky small gray bag hanging from my wall?” then you might have a Plaster Bagworm. The case of the plaster bagworm is somewhat similar to a watermelon or pumpkin seed in its shape, size and flatness. It can look like an empty case or shell. Slit-like openings are located at each end. The entire thing is about half an inch long. It’s made of silk fiber, sand, lint and other miscellaneous debris. The openings at the end allow the larvae to move and to eat. They are somewhat beneficial as their diet is typically spiderwebs. 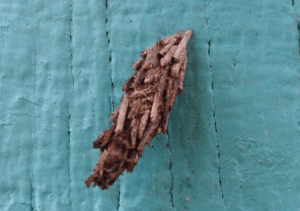 Bagworms can cause damage by stripping plants of foliage. Leaf damage is usually noticeable in June to late July and August. Infestations usually go unnoticed in pine trees because the bags look like pine cones. Bagworm larva create a bag composed of silk and plant debris as they feed. 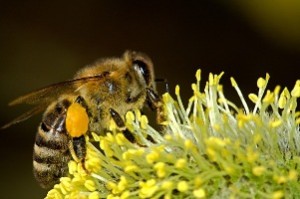 Honey Bees have long provided us with honey and beeswax. The worker bees are the only ones that humans usually ever see. A single hive can have as many as 80,000 bees. Honey bees have a barbed stinger, so when they sting a human or animal generally the stinger remains in the victim tearing from the bee. This results in death for the bee. The venom is what makes the bee sting hurt. A muscle attached to the venom gland continues to pump poison into the wound, even after the bee is gone.

If you have a question or need assistance?

What Our Customers Are Saying

Good, reliable, and honest service. Took care of what I needed and the staff is very friendly!